Zach Vorhies was a Google employee who downloaded 950 pages of internal documents describing Google's censorship regime and then delivered them to the DOJ. He also disclosed these document to the public via Project Veritas on August 2019. 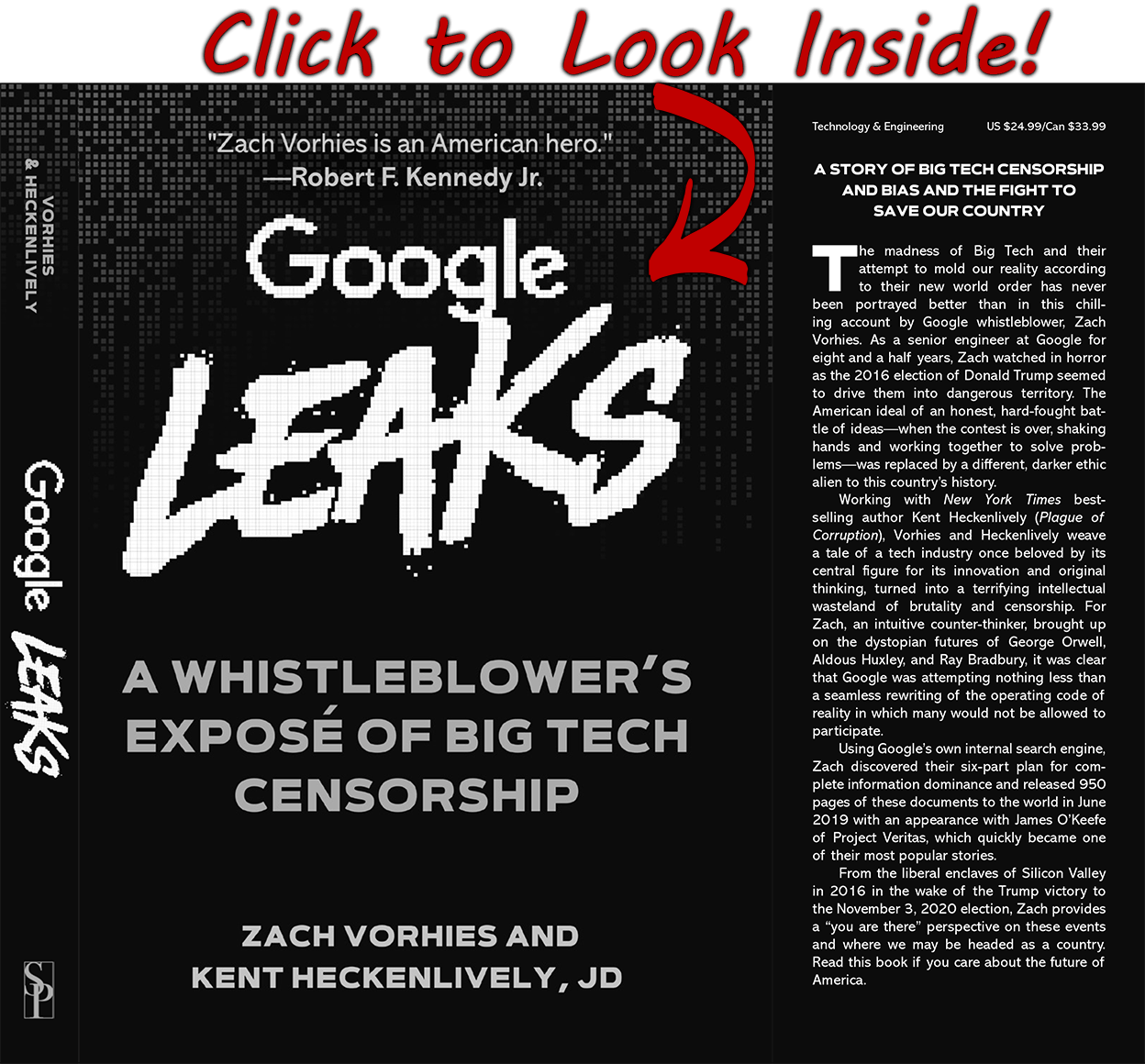 As a Google whistleblower Vorhies walked out 950 pages of Google internal documents to the Department of Justice anti trust division detailing Google's extensive censorship project. This project is called "Machine Learning Fairness", which has already corrupted Google Search, YouTube and News products. This, along with various black lists and secret page rank scores, is being used by Google to manipulate public opinion according to a hidden agenda.

Research shows biased search rankings can shift voting preferences of undecided voters from a 50-50% split to a 10-90% in either direction. Whoever controls the ranking of information for the general public rules the world.

The goal of this website is to expose how Google's algorithms work to censor you, and how they distort search results. The hope is that by exposing it we can stop Google from seizing power.

Zach was on stage with James O'Keefe to talk about Big Tech censorship and cancel culture.

"We are pushing down the fake news - we're demoting it. And we're increasing the authoratative news and promoting it."

How does Google rank mainstream media and alternative sources? What does Google see as "Fake" news? And how did rogue Google employees try to cut off Breitbart from it's Ad Revenue stream?

Google's plan to force a "single point of truth" on news organizations.

Don't let the nice words fool you, this plan injects Google politics into it's ad-exchange monopoly.

Google states that "people are programmed", when justifying the use of it's "Machine Learning Fairness" algorithms to re-rank and censor the internet. See this bombshell internal document laying out plans to control internet search.

Trump tweets "Covfefe" which translates to "I will stand up". After the New York Times says the word is non-sense, executives at Google order it's removal. The mainstream media then advocates removing the President due to "mental incapacity" (via the 25th amendment).

San Francisco Police, its bomb squad and the FBI surrounded the residence of Google whistleblower Zach Vorhies, just hours before he was scheduled to provide evidence to the Justice Department detailing how the tech giant has been manipulating its algorithms to promote an anti-Trump agenda and censor Conservatives on Google and YouTube.

How did Google become the internet’s censor and master manipulator, blocking access to millions of websites? The company maintains at least nine different blacklists that impact our lives, generally without input or authority from any outside advisory group, industry association or government agency.

Join Mike Adams, Robert F. Kennedy, Zach Vorhies and others in the fight for Medical Freedom and Autonomy.